Three weeks ago, we announced to the public our blockchain based identity platform. We appreciate the community response and have been hard at work on the formal white paper. Today, we would like to release the first half of the white paper: the detailed use cases. Stayed tuned for the second half, the technical implementation.

In today's business landscape, the platform owns and monetizes the data which constructs the individual identity, making sharing or revocation of that data (right to be forgotten) disadvantageous. The European Union (EU) views data privacy as a fundamental right and has crafted the General Data Protection Regulation (GDPR) to enforce adherence.

The Trusted Identity Platform allows for the creation, management, and sharing of identities using a distributed ledger overlaid on the DataNexus routing platform. This gives individuals the ability to to control and monetize who gets their identity data and when, along with the ability to revoke access to that data at any time. The ledger records identity grants, transfers, and revocations allowing enforcement, auditing and compliance. This provides a public platform to both audit and enforce entity compliance.

Identity creation is the first step in the sharing of entity information. The business entity is assumed to have created at least one public/private key pair to use in the encryption of customer information. There is no technical limitation on key pairs by customer segment, region, or even individual, though this would be extreme and require extra effort in key management and escrow.
The distributed ledger records the communications and actions between entities. Note that the keys themselves are exchanged through the DataNexus platform, not as payload within the ledger.

Identity granting is a powerful way for the individual entity to control who gets their data and how it is used. In the initial case of identity creation, an implicit grant is normally assumed (see the section on identity creation). Many businesses have established relationships with either internal units or external partners, for example an automobile dealership may have preferred insurance carriers, an insurance carrier may have financially separate units that deal with automotive and home, or healthcare providers may have data analytics companies to assist in preventive care. These businesses can offer the individual incentives to share data in the forms of discounts, thus allowing the individual not only control over their personal information, but also the monetization of it.

Once identity grants have been established between all participating entities, the actual sharing of the identity data can occur.

At any time, either side of an identity relationship can choose to end the grant which allows information exchange to occur. This is usually in response to a change in the business relationship, for example a customer may wish to change providers.

Popular posts from this blog

- June 03, 2019
Within Engineering@DataNexus, we work hard to build a data platform that works for all of our customers, regardless of size or complexity. One of our first internal engineering requirements is ubiquity, in that w hether our customers run on AWS, Azure, OpenStack, or bare metal, our platform looks, feels, and behaves the same . To that end, we are huge fans of process automation, whether it's creating VPCs and networks, spinning up or down virtual machines, or configuring our data platform layer. We heavily rely on Ansible to stand up and configure our application and data layer, consisting of elements such as Kafka, Cassandra, Postgres, Elasticsearch, or even operational tasks such as wiring data sources to data destinations. As most folks would expect, we organize each layer into one more or Git repositories. Our Kafka code is responsible for installing and configuring Apache Kafka, as well as both Confluent enterprise and community. That encompasses Apache projects such as Zook
Read more 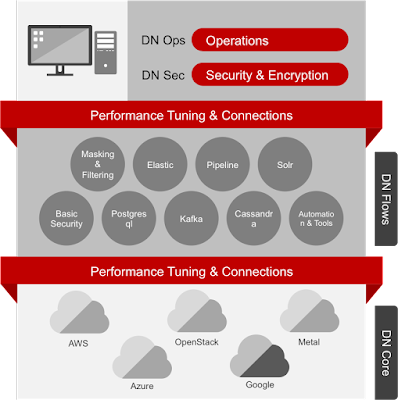 Amazing amount of progress on v2.0 of the DataNexus platform. In the past few months we have added: 1. Full idempotent automation of a new or expanding Kafka or Confluent secure cluster deployment across multiple clouds 2. Ability to choose and deploy management including Cruise Control or Control Center 3. Ability to detect drift across configurations of large data clusters with alerting and reporting 4. Ability to build a simple rules file and mask/filter any data in stream without complex coding 5. Separation of Application logic from underlying cloud infrastructure 6. Addition of more connectors for sources and destinations Coming this month is a completely simplified approach to idempotent infrastructure deployments: 1. from new account or existing 2. cross cloud and region support for a single application 3. automated tagging in clouds 4. deployment to bare metal with all cloud features 5. additional security controls at infrastructure layer 6. simplified files for configura
Read more

- March 20, 2018
March 20, 2018 by Christopher Keller We never set out to work at the intersection of compliance and technology; it just sort of happened that way. From developing a world first  Hadoop  solution that was both favorably HIPAA and PCI accredited, to  APRA  approval for public cloud data migration, to our to our latest efforts with our blockchain-based identity trust, we’ve been working in this space a while. So when I read the article on a nightmare data access request (you can find that article  here ), my thoughts naturally went to “hey, we can help with that”. The article points out nine high level requests that would cause compliance issues for companies without established business processes and backed by technology designed to address requests such as these.  We’ll briefly go through each high level item and see whether or not our platform can impact its fulfillment: When using an identity established in our  data trust  platform, it’s relatively straight forward to res
Read more